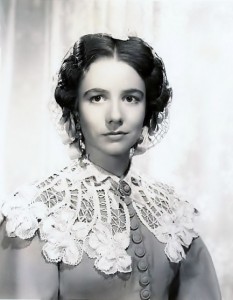 Alicia Rhett in “Gone With the Wind” 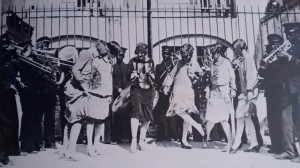 In the early 1900s, Charleston experienced a renaissance fueled by artists, writers, musicians, poets, and preservationists. Alice Ravenel Huger Smith, Elizabeth O’Neill Verner, and Alfred Hutty created lovely intimate scenes of the old city to sell to tourists. Charleston’s Poetry Society, one of the first of its kind, was formed in 1920. Dubose Heyward collaborated with George Gershwin to transform his novel Porgy into the opera “Porgy and Bess”. Jenkins Orphanage jazz bands played in the streets of Charleston, then New York and London. The arts brought much needed attention to the rather beleaguered city and lent support to the budding preservationist movement in Charleston. (2 hour tour)

The Grimke Sisters from Charleston 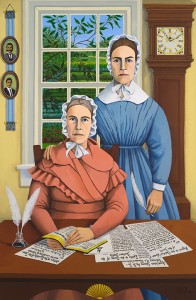 “Sarah and Angelina, the Grimké Sisters from Charleston”

Sue Monk Kidd’s bestselling novel, The Invention of Wings (Jan. 2014), has brought the story of the Grimké sisters to light. Though infamous abolitionists and feminists in their day, Angelina and Sarah Grimké have remained obscure in American history and (mostly) unrecognized in Charleston, city of their birth. The popularity of Kidd’s novel led to the creation of this walking tour by Lee Ann Bain and Carol Ezell-Gilson as part of the Preservation Society’s Fall Tours this past October, 2014. The tour sold out every offering. For more information please visit The Grimké Sisters Tour.

This tour gives a general overview of Charleston’s history from the colonial era onward – through the Revolutionary War, the Civil War, to the city’s rediscovery and revitalization of the past 40 years. Participants will gain insight into Charleston’s early wealth and culture, viewing the city’s impressive public buildings and private mansions. Visitors will learn of architectural influences and other factors that resulted in modifications to original structures, with explanation of the single house, the double house and dependencies. (2 hour tour) 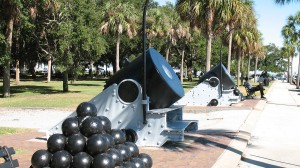 Participants will learn of personalities and events leading up to the Ordinance of Secession, signed in Charleston on December 20, 1860, effectively dissolving the Union. Charleston was the largest slave port in North America, its waterfront the location of numerous slave auctions. Visitors will gain understanding into the state’s economy and its determination (at the time) to preserve the institution of slavery. Fort Sumter provides backdrop to hear of the start of the War, the siege of Charleston (1863-1865), and the eventual fall of the city. (2 hour tour) 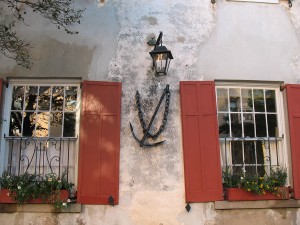 Charles Town became a busy seaport, prey to pirates looking for valuable cargo. This tour tells the story of the infamous Blackbeard’s siege of the city in 1718; this exciting drama unfolds within the walls of the old city. Participants will view the Pink House (circa 1688) – a tavern at the time of Blackbeard’s visit, the tomb of Colonel William Rhett (famous pirate hunter), and hear of the trials, convictions, and numerous pirate hangings on scaffolds constructed outside the city wall. (2 hour tour) 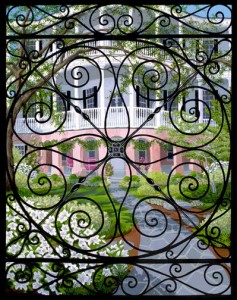 Learn about Charleston’s magnificent ironwork while strolling through the lovely historic district. Much early ironwork was destroyed in raging fires and many noteworthy gates and fences were donated to the Confederate cause to be melted down for cannonballs and “skins” for the ironclad boats. But, even with the losses, the city retains a wealth of impressive ironworks. Hear the story of Philip Simmons, Charleston’s most famous ironworker, and of earlier blacksmiths who crafted beautiful gates throughout the city. (2 hour tour) 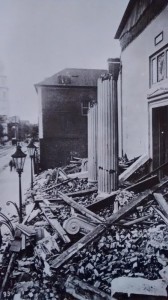 On August 31, 1886, at 9:51 pm, a magnitude 7.3 earthquake devastated Charleston. The quake was felt as far south as Cuba and as far north as Boston where church bells rang with the force of it. Countless brick structures and buildings on landfill suffered great damage. The waterfront wharves of the port city were in ruins. This two hour walking tour will take you back to the devastation through old photos and eye-witness accounts. You will learn of the City’s remarkable recovery after such a disaster under the inspiring leadership of William Ashmead Courtney, one of Charleston’s most admirable mayors. (2 hour tour) 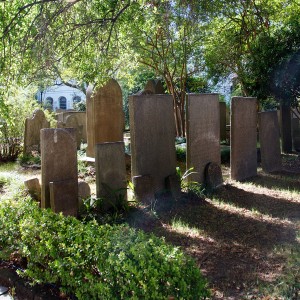 Stroll through beautiful mysterious graveyards where the dead have rested in peace for several centuries. View examples of finely crafted slate and marble funerary art showing the evolution from skull and crossbones to winged skulls to cherubs to portrait stones. Hear lively stories of some of Charleston’s most interesting personalities who now lie within the graveyard walls. (2 hour tour) 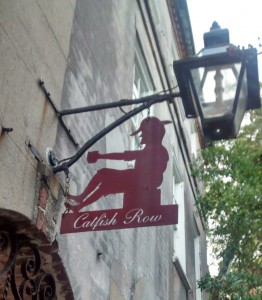 This tour explores the fiction and facts surrounding Dubose Heyward’s successful first novel, Porgy (1925). Hear about the inspiration for the novel and the subsequent events that brought Dubose Heyward and George Gershwin together to create and collaborate artistically on the first great American opera “Porgy and Bess”(1935) . Learn about the Gullah Culture of enslaved Africans and their descendants; a culture rich in folklore, storytelling, and song with its own unique rhythm, language, crafts, and cooking. Gullah Culture in the Lowcountry provided a treasure trove of material for the artists and writers of the Charleston Renaissance (1915-1940), of which Dubose Heyward was the most widely known. 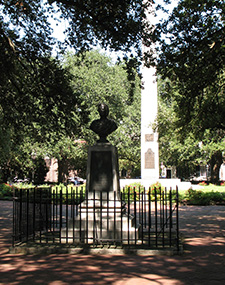